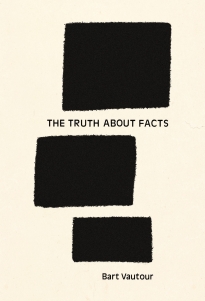 The Truth About Facts came out on the 1st of November with the good folks at Invisible Publishing.

Some amazing poets have already taken a look and said some extremely kind things:

“What is a fact? What is a poem? While a reconciliation of the two might seem scholarly and ambitious, you’ll find nothing but friendly invitations in The Truth About Facts. Each poem reveals a smart and thoughtful mind in motion, and there is as much playfulness here as there is necessary critique.”
— Sachiko Murakami

“There is a solid tradition of poets taking up the alphabet itself as their point of attack. But I have a hard time thinking of anyone who has done so with as much gusto as Bart Vautour. There’s no jiggery-pokery here — just the worshipping of strange alphabetic gods. I am a convert. I believe every word of it.”
— Stephen Collis

I am a writer and I work at Dalhousie University. My research focuses on Canadian cultural production, Creative Writing, Editorial Studies, and Social Justice Movements in Canada.

With Invisible Publishing, I also edit the Throwback Series of books and I’m co-editor of the Canada and the Spanish Civil War Series of scholarly editions with the University of Ottawa Press.

With Emily Robins Sharpe and Kaarina Mikalson, I co-direct the Canada and the Spanish Civil War Project.

I live in K’jipuktuk/Halifax with my partner, our daughter, and Marley the dog.